DONALD Trump has pointed the finger at those who he believes are to blame for the California wildfires, as nine people died and firefighters battle the flames.

California Wildfires Cause Thousands of Evacuations

US President Donald Trump has said that “gross mismanagement of forests” is to blame for two unchecked wildfires burning in California, where nine people have been killed and hundreds of thousands forced to evacuate.

“There is no reason for these massive, deadly and costly forest fires in California except that forest management is so poor,” he wrote in a Twitter post early on Saturday.

“Billions of dollars are given each year, with so many lives lost, all because of gross mismanagement of the forests. Remedy now, or no more Fed payments!,” he added.

His reposne to the fires drew criticism across social media and celebrities like popstar kathy Perry, who described his tweet as an “absolutely heartless response”.

She added: “There aren’t even politics involved. Just good American families losing their homes as you tweet, evacuating into shelters.”

Others questioned if he knew the difference between wildfires and forest fires. They also attacked him for issuing a tweet which was all about money, with no sympathy or thought for those whose lives were affected by the tragedy.

President Donald Trump has spoken about the wildfires in California. Picture: APSource:AP

This is an absolutely heartless response. There aren’t even politics involved. Just good American families losing their homes as you tweet, evacuating into shelters.

There is no reason for these massive, deadly and costly forest fires in California except that forest management is so poor. Billions of dollars are given each year, with so many lives lost, all because of gross mismanagement of the forests. Remedy now, or no more Fed payments!

6,340 people are talking about this

As people perished in the fires, hundreds of thousands ordered to evacuate across California, with one rapidly spreading blaze threatening the resort of Malibu, home to Hollywood stars.

The fatalities were reported in a massive late-season inferno in the town of Paradise, in Butte County north of the state capital Sacramento, where some 6,700 structures went up in flames – officially becoming California’s most destructive fire on record.

The fast-moving blaze, which authorities have named the “Camp Fire”, broke out Thursday morning. Fanned by strong winds, it has scorched 36,400 hectares and is only five percent contained, the California Fire Department (Cal Fire) said late Friday.

Tim Billow, 62, tries to save his plantings in his backyard as the Woolsey Fire burns in Malibu. Picture: APSource:AP

A firefighter keeps watch as the Woolsey Fire burns a home in Malibu. Picture: APSource:AP

Other large fires raged in southern California, including one just north of Los Angeles and another in Ventura County near Thousand Oaks, where a Marine Corps veteran shot dead 12 people in a country music bar on Wednesday night.

“The magnitude of destruction we have seen is really unbelievable and heartbreaking and our hearts go to everybody who has been affected by this,” said Mark Ghilarducci, the director of the California Governor’s Office of Emergency Services.

Governor-elect Gavin Newsom declared a state of emergency to provide assistance to the fire-hit areas.

A firefighter battles the Woolsey Fire in Malibu. Picture: APSource:AP

“I don’t have all of the details because we have investigators out on the field” trying to reach the locations where casualties were reported, Honea told a press conference.

Wind-driven flames from a wildfire race up a slope and cross the road in Malibu. Picture: APSource:AP

Palm trees frame a home being destroyed by a wildfire above Pacific Coast Highway in Malibu. Picture: APSource:AP

But he did say that four people were found inside a vehicle in the Paradise area, while another was found nearby outside the vehicle. Three more were found outside a residence, and one inside a house.

Dozens of other people were reported missing.

Residents who escaped Paradise posted harrowing videos to social media as they drove through tunnels of swirling smoke and orange flames to outrun the wildfire.

Mandatory evacuation orders were issued for more than 52,000 people in the scenic area in the foothills of the Sierra Nevada mountains.

People lead horses and ponies down Pacific Coast Highway to an evacuation area at Zuma Beach in the Point Dume area of Malibu. Picture: APSource:AP

“Not one home will be left standing,” he said. “I’m devastated.” “We’re just hoping that our brand new home that we were hoping to move into tomorrow is not burned to the ground,” Winstead said.

A staircase that once led to another level is seen among the burned remains of home in Paradise, California. Picture: APSource:AP

The residents of the beachside enclave of Malibu and the gated community of Hidden Hills, where celebrities including Kim Kardashian and Grammy Award winners Drake and The Weeknd live, were ordered to leave by authorities. 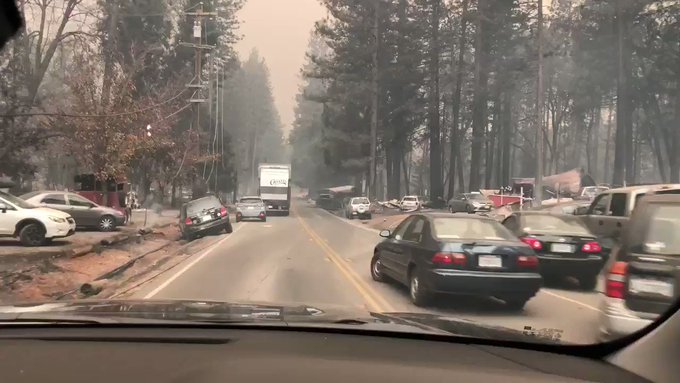 These abandoned and burned out cars shows you what a panic it must have been for residents trying to escape the Camp Fire. Unreal scenes in Paradise, CA, this morning. #CampFire

12.4K people are talking about this

A store burns as the Camp fire tears through Paradise. Picture: Josh Edelson/AFPSource:AFP

Australian businessman Jon Sully, his wife Kath and their three children Spencer, Isabelle and Hamish, also had to make a mad dash from their Hidden Hills home as the fire line approached on Thursday night.

“We got the first mandatory at 7.06pm last night and packed the kids, dogs, passports, photos etc in the car,” Mr Sully, a co-founder of retail leasing platform StoreMatch, told AAP.

“We could see the red glow over the ridge that was flaring up so didn’t hesitate to go.”

A home burns during the Camp fire in Paradise. Picture: Josh Edelson/AFPSource:AFP

They went to a friend’s house in nearby Agoura Hills but three hours later were forced to evacuate again when police on loudspeakers drove around the neighbourhood warning they were in peril.

They made it to a third friend’s house and spent a nervous night. The threat remains for the region.

Evacuees from a wildfire rest on cots and blanket supplied by the Red Cross in the gymnasium at Taft Charter High School in the Woodland Hills section of Los Angeles. Picture: AP Photo/Richard VogelSource:AP

In southern California, authorities said some 200,000 people are under evacuation orders.

The Ventura County Fire Department said the “Woolsey Fire” had burned around 35,000 acres, was not contained, and that evacuation orders were issued for some 88,000 homes in the county and neighboring Los Angeles County.

“It is critical that residents pay close attention to evacuation orders,” the Los Angeles County Fire Department said on Twitter. “This is a very dangerous wind-driven fire.” The “Woolsey Fire” has jumped Highway 101 near the town of Agoura Hills and portions of the main coastal north-south artery have been shut down, triggering mandatory evacuations, including the entire city of Malibu.

“We heard this was coming so we set up on the sprinklers and we hosed the whole house down,” said Patrick Henry, a Malibu resident. “We pretty much had enough time to get the dogs in the trunk.” Malibu is one of the most in-demand locations in California for Hollywood stars seeking privacy and luxury, and has been home to Leonardo DiCaprio, Jack Nicholson, Jennifer Aniston, Halle Berry, Charlize Theron, Brad Pitt and a host of other celebrities.

Reality TV star Kim Kardashian West, who lives just north of coastal Malibu in Calabasas, revealed on Instagram that she was forced to flee her home.

“Just landed back home and had 1 hour to pack up & evacuate our home. I pray everyone is safe,” she said.

TV star Charlie Sheen tweeted that his father, Martin Sheen, and his mother Janet were both missing – but the pair surfaced unharmed hours later at a beachside evacuation spot.

Sheen said this was the worst fire he had seen in 48 years of living in Malibu. Director Guillermo del Toro tweeted that Bleak House, his museum of horror movie memorabilia, was also in the path of the flames.

People wear masks while walking through the Financial District in the smoke-filled air in San Francisco. Picture: AP Photo/Eric RisbergSource:AP

The fire zone is a popular area for Australian expatriates to live. More than 3000 hectares of land and at least 20 homes have been destroyed as two fires, powered by strong winds, were unstoppable as they headed west, jumped the 101 Freeway and roared towards Malibu on the coast.

Authorities said about 75,000 homes in Ventura and Los Angeles counties are under mandatory or voluntary evacuation orders and the number could grow.

My Tweets
Unlocking The Hidden Me

Tranquil notions, melange of sterile musings & a pinch of salt

A travelogue of museums, historic homes, and other curious destinations.

WHEREVER YOU GO, GO WITH ALL YOUR HEART.

Welcome to my blog:raise your voice ❤

JUST AN ORDINARY PERSON WITH A HOPE TO MAKE A DIFFERENCE💫